Grumpy me says that we should stop giving stuff away on Freecycle. I don't know if it will last, but if I get my way...

Freecycle is a very simple concept. People give away items that are still usable but that they no longer want. Blair and I have been active users of Freecycle for years -- on both the giving and receiving ends. We have gotten and given many items including clothes, furniture, tools and a lot else. I've never been particularly enthusiastic about it because of the logistics. But as long as Blair did the work I never had reason to object. It has definitely saved us some money on things we would have had to buy otherwise. And I've had fun receiving the occasional box of assorted CDs.

There are the flakes -- people who ask for something and then don't show up to pick up as promised. We recently threw out a box of books that had gotten soaked in rain and snow because the person who had promised to pick them up never showed. And then there have been times that people don't show up as promised, but come a week ore more later -- after Blair has given the items to someone else -- and gotten annoyed that it was gone.

Another issue that we has been coming up is when Blair puts out several items promised to different people. Sometimes people just grab stuff that's been promised to someone else. It shouldn't be a hard rule to understand -- if you're coming for a bag of used trousers, just take the bag of used trousers. Don't grab the dinner plates.

But the final straw -- for me anyway -- was when someone grabbed the snack box. We keep a box of snacks out for the mailman, delivery people, and the sanitation men. I blogged about that here, here and here. On Saturday afternoon Blair looked out the window just in time to see a couple taking the whole snack box back to their car. She ran out to stop them, and explained that the snacks weren't being Freecycle. They complained that the dishes that they were there for were gone, and grumbled about returning the snacks. By Sunday morning, however, the snack box was gone. I don't know if that same couple came back for it or if someone else took it, but it's really annoying. And I wonder if I need to wait awhile before replacing it -- so that whoever took it stops coming by.

So I told Blair that I want to stop giving stuff away on Freecycle. She said OK. I don't know if it will stick, but we'll see.

As always, there may be spoilers here. And the trailer may be NSFW and/or NSFL.

Plot:
I really enjoyed Starblack while we were watching it. Starblack seemed like a character out of a comic book-inspired TV show. There are obvious nods to The Lone Ranger, and the whole dynamic of Jimmy/Starblack's interaction with Caroline is reminiscent of the Clark/Superman/Lois Lane triangle in Superman. Though there is a lot of violence, a lot of the movie -- notably the extended barroom fight scene early on -- is played for laughs.
But, while Starblack is enjoyable, it's not really memorable. Too much of the plot was too easy to figure out. I found myself thinking things like "it can't be that simple" and "there has to be a twist in there." But no. It was that simple, and there were no real twists to be had.
Starblack is much more like an American western than I really like in my spaghetti. It's an unambiguous story of good vs. bad with good prevailing in the end. And I'm used to grayer, bleaker scenery than the lush beautiful greens that this offered.
Reaction and Other Folderol:
The biggest problem with
Ratings
Me: 8
Bob-O: 9.2
Christina: 9.5
Dave: 9.7
Ethan: 8
Cats: No cats.
on January 23, 2022 No comments: 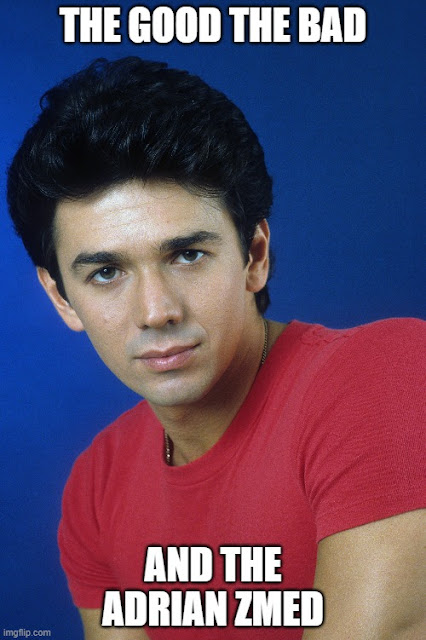 Email ThisBlogThis!Share to TwitterShare to FacebookShare to Pinterest
Labels: zmedsday 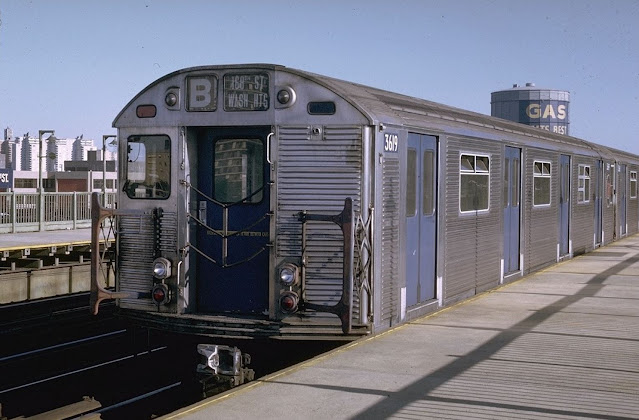 It's been nearly six decades since the R32 subway car first entered service -- they were running in the system before I was born*. And today is their last day. I believe they've already been taken out of regular service, but the TA is running a few special trains so that railfans and sentimentalists can get ride them one last time. The R32 is my favorite of the cars in active service -- it has been since they took the R33s and R36s (then running on the 7 train) out. As of tonight I won't have a favorite.
The R32 dates back to when subway cars had style and beauty. In my mind that ended with the R42s. Those from the R44 on seem like characterless plastic shells -- cars to be ridden but not enjoyed. I remember once when I was in school, going home on an F train. At that point all the Fs were R46s. At Union Turnpike an E train of R32s pulled in. It surprised me because my Es and Fs had been exclusively R46s. But I got off the F just as the doors closed and ran across the platform to get the E. It would be a longer ride -- at that time the E and F both went to 179th Street in Jamaica, but the F was an express and the E was local. I stood on that train amazed. It seems odd now, but I remember the odd sensation marveling over it. "I'm on a E train, and it's R32s!" Most people probably can't understand it. I hope that some railfans can. It turned out that the TA was just starting to switch things up. R32s were replacing The R46s on the E and F. I have no idea where the R46s were going. I also have no idea why the TA decides to move car types around, but that's another matter. Within a month all the Es and Fs were R32s.
I will always associate the R32s with a few of the models that came later -- the R38s, R40s and R42s -- as representing a specific generation of designs. I don't know of any real reason to associate those few models. Maybe it's aesthetics. The R32s had stainless steel exteriors, while the predecessors didn't. That feature was carried over to the 38s, 40s and 42s. The R44s and R46s were very much a departure designwise, so I think of them -- whether rightly or wrongly -- as representing a new generation. And I didn't like the new generation. They seemed all plasticy and fake. And the motorman's cab spans the full width so it's not as easy or fun to look out the front window. I will acknowledge that it's probably more comfortable for the motorman and conductor.
But of its generation, I like the R32s the best. The R40, with its sleek slant end, had a certain unique style --even if they had to change that for safety reasons. And I liked the windows in the doors at the ends of the slant-40s. They went down low enough that even a young short railfan could experience the rush of standing at the front window as the train barreled along. But those seats! The R40s and R42s had the most uncomfortable seats in the system. The back was straight and angles badly, with the top being low enough to make it even worse. I never wanted a seat on those cars. The R38 was fine -- I have nothing bad to say about it. But I just never warmed up to it the way I did the R32. That may be because I didn't ride them as much. There were fewer in the system. That said, the corrugated exterior of the R32, with its tighter crinkles that go all the way up, was just more attractive than the wider crinkles that went only halfway up the side of the R38.
For a lot of my life the F train (and for a while the E too) was my home line. The R46 is the subway car that I most associate with the F. of course, it wasn't always R46s. My earliest subway memories -- going to elementary school -- include cars in the R1-9 series, and of course I remember R32s and others. Now they us cars that are post-R46 -- cars whose model numbers I don't really know
I thought about heading to Brooklyn to take one of those final rides. At another point in my life I definitely would have. But none of my kids is interested, though Ethan said he would go if I really wanted him to. It's not something Blair really wants to do, but she said she's go and have a good time if I wanted to. Still, I'll skip it. I suspect it will be crowded, and I won't get a spot by the front of back window. So sometime late today I'll think about the R32. In my mind I'll raise a toast to a great subway car and a bygone era.
on January 09, 2022 No comments:

Email ThisBlogThis!Share to TwitterShare to FacebookShare to Pinterest
Labels: subway

As always, there may be spoilers here. And the trailer may be NSFW and/or NSFL.

Plot:
Governor de Leyra loves Virginia. But Virginia loves Don Manuel. So the masked hero, Quintana wants to save Manuel from de Leyra. Spaghetti ensues.
Reaction and Other Folderol:
One thing I love is a compelling antihero. The TV dramas I watched in recent years -- Breaking Bad, Boardwalk Empire, The Americans (and others) -- feature them. And that's one thing I like about Spaghetti Westerns. While American Westerns typically featured good guys and bad guys, the Italian ones featured bad guys and worse guys. Sadly, that was something Quinatana lacked. Quintana is a Zorro-like hero -- a good man waging war against bad people. And I find that boring.
Another boring thing about the character is his brilliance with a gun. I wouldn't try guessing his kill count, but he just keeps shooting them down as they come at him (and they seem to all do pirouettes as the go down). I realize that great gun skills are a hallmark of Western heroes, but Qunitana's seem to go beyond the normal greatness.
Add to that the fact that the plot is pretty basic with nothing in the way of innovative twists, and there's no real character development. I had a hard time finding much to hook into to keep my interest.
There were some things that I liked in the movie, though they were mostly in the realm of the odd. I did find a couple of lines of dialogue amusing for their clunkiness: "The man's no more violent than a watermelon" and " For a long time I've found your love extremely boring" come to mind. And there's a scene in which one of the priests is kneeling and praying in front of a crucifix. The crucifix answers him in a gruff voice, advising that violence can sometimes be helpful. Admittedly, I am not sure if we, the viewers, are supposed to interpret it as God actually answering or if it's just the priest's drunken delusion.
The camera work was odd. Most of the film was shot at a slant -- the way the Batman TV show showed the criminals' lairs. The soundtrack was a mixed bag. The music was great. But the dialogue and sound effects seemed oddly disconnected from the film. And the constant loud clip clop of horse hooves -- even when there were no horses to be seen was offputting.
Ratings
Me: 5.5
Bob-O: 7.5
Christina: 8.2
Dave: 9.3
Ethan: 7
Cats: No cats.
on January 08, 2022 No comments:

What do I read?